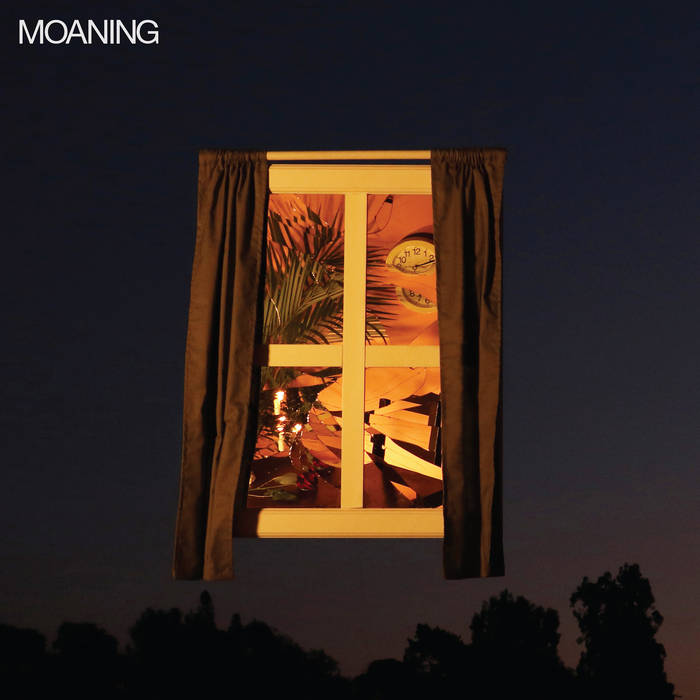 tomunderground Saw this band live in St Paul. Such a great show. A sort of 21st century Joy Division.

Nikki is Global A Go Go

Moaning is a band defined by its duality. The abrasive post-punk trio comprised of LA DIY veterans, Sean Solomon, Pascal Stevenson, and Andrew MacKelvie, began nearly a decade after the three started playing music together. Their impassioned debut album comes born out of the member’s experiences with love and distress, creating a sound uniquely dark and sincere. Although the band is just breaking out of their infancy, Moaning’s sleek and cavernous tone emphasizes the turmoil of the era they were born into. One where the endless possibility for art and creation is met with the fear and doubt of an uncertain future.

Solomon, Stevenson, and MacKelvie initially met as teenagers while growing up in the San Fernando Valley, and immediately developed a kinship through Los Angeles’s local music scene. The three began regularly frequenting DIY institutions like The Smell and Pehrspace, eventually selling out dozens of their own shows at both venues with their first few bands. Moaning’s conception came when Solomon sent Stevenson and MacKelvie the first demo for “Don’t Go,” setting the tone for the impulsive songwriting that would follow. The three fleshed out Solomon’s primitive recordings, adding in MacKelvie’s heavy syncopated drumming, and Stevenson’s melodic driving bass and synth parts, capturing each member’s personality in their sparse and fuzzed out tracks. Like many of their previous collaborative projects, Moaning forces pain up against pleasure, using the complexity of personal heart break to inform the band’s conflicted sound. The band chose the moniker Moaning, admiring the ambiguity the name held, and hoping to reference both an intimate wail and an anguished scream.

The band’s homemade video for an early, home-recorded version of “The Same” caught the attention of Alex Newport, a seasoned engineer and producer who had previously worked with At The Drive-In, Bloc Party, and the Melvins. With Newport, Moaning began working on the tracks that would make up their self-titled release, employing a lush, open ended production quality that had never been at the band’s disposal. Tracks like “Artificial” stand out among the recordings, where Moaning used the studio’s recourses to take their frantic live arrangement and give it the intensity merited by Solomon’s lyrics.

As a whole, Moaning drifts from sentimental to catastrophic, hiding meek and introspective lyrics within powerful droning dance songs, giving sonic nods to some of the band’s musical heroes like, New Order, Broadcast, and Slowdive. The band’s youthful attitude is met with the weight of topics like loss, routine, and mental health, reflecting the anxiety towards the status quo that much of their generation faces today. Where many young bands take years to find their footing as writers and performers, Moaning has built up a confidence in sound and vision from the ten years of playing basements, bars, and ballrooms together in their previous projects. Yet, even with their polished exterior, Moaning continues to make the sacrifice of deeply personal anecdotes and emotions to their audience for the benefit of their craft.

Bandcamp Daily  your guide to the world of Bandcamp

Cannibal Corpse's George "Corpsegrinder" Fisher stops by for an interview